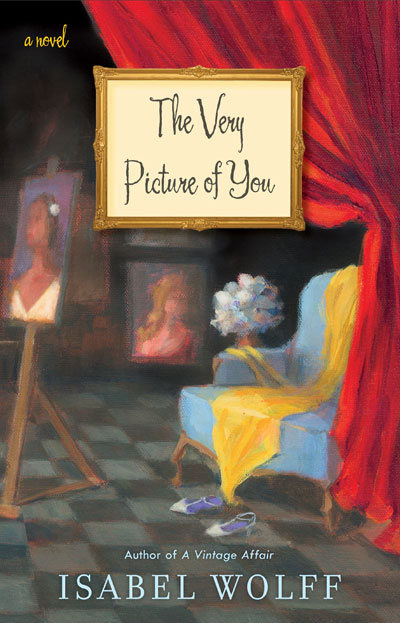 The Very Picture Of You

Ella Graham is a portrait painter, whose luminous and insightful likenesses are beginning to gain her widespread recognition. But when her younger sister, Chloe, asks her to paint her American fiance, Nate, as a wedding present, Ella is dismayed. She loathes Nate, and she distrusts him - painting him is the last thing she’d like to do. But Ella wants to make her fragile sister happy, and so she puts aside her misgivings and reluctantly accepts. As they start to spend time together in the intimacy of the studio, Ella realises that there is more to Nate than meets the eye.

At the same time Ella is learning about her other sitters’ lives: there’s an elderly widow with a wartime secret, a beautiful French woman who’s dreading turning forty, and a handsome politician who has a confession to make. Then, out of the blue, comes a message from Ella’s father John, who abandoned her and her mother when Ella was five.

In the meantime Chloe is planning her dream wedding: and as the day draws ever nearer Ella realises, to her horror, that she is falling in love with the one man she shouldn’t…

Buy The Book
"Isabel Wolff is a wonderful writer who weaves humour and pathos to great effect... I loved this book with its compelling characters, thoughtful air, warmth and wit."- Daily Mail
"This novel won't disappoint."- Now Magazine
"This heart-warming, gentle story is pure feel-good stuff and should be added to your must-read list immediately."- Candis Magazine
"A wonderful story."- The Sun
Tweet Follow

As I finished writing A Vintage Affair the idea of featuring a fine artist in my next novel started to dominate my thoughts. In particular I began to think about portraiture, and about the peculiar, sudden intimacy of the portrait sittings, because anyone who has them self painted is permitting a complete stranger to stare at every square inch of them for hours on end. I became fascinated by the thought of this, and in particular by the idea that the portrait artist seeks to portray their subject not just physically - their musculature, sinew, skin, hair and bone - but psychologically and spiritually too. I wondered what it must be like to sit there being scrutinized so intently. Would one talk to the artist? If so, in what depth? Would one feel embarrassed? Would one spill one’s soul, as if in the Confessional or in therapy, or would one try to conceal one’s true self from the artist’s gaze? Would one want to befriend the artist or perhaps even fall in love with them? With these thoughts crowding my mind I drafted a story about a portrait painter her sitters, their secrets - and their lies.

For research I interviewed six of Britain’s foremost portrait artists - Jonathan Yeo, June Mendoza, Fanny Rush, Paul Benney, Nick Offer and Michael Noakes. They helped me understand the technical processes involved in portraiture - how it is that the artist is able to place marks on the canvas, whether in oil paint, charcoal or chalk, that will evoke the sitter, body and soul. They helped me understand the psychological processes too - the way in which the artist finds a ‘way in’ to the portrait, by noticing a particular gesture, or by observing how the sitter is ‘in their skin’. Do they sit in a relaxed way, or are they tense? Are they open and expressive, or remote and closed off? We also talked about the extraordinary power of portraiture, the way in which these two-dimensional images, parading as three, can be so vital that the onlooker will think that they live and breathe. In addition to my research I decided to have myself painted, in order to understand the process from the other side of the canvas. So I commissioned Anastasia Pollard, an award-winning American portraitist, whose luminous, enigmatic likenesses hold, for me, the additional appeal of being painted on a modest scale. Going to Anastasia’s east London studio for our six two-hour sittings made me realise how much you reflect on your life while you’re being painted. You think about who you are, and on what you’ve done, or haven’t done, and on how others may see you. (I’m thrilled to say that Anastasia’s portrait of me will be included in theRoyal Society of Portrait Painter’s Annual Exhibition at the Mall Galleries in London from May 3rd to May 18th.)

The Very Picture of You is about Ella’s sitters and their various problems; it’s about her growing love for Nate, as she falls for him brushstroke by brushstroke, wishing that the bittersweet happiness of the sittings will never end. It’s also about looking, and about how we often fail to see the whole picture. Ella’s mother Sue has concealed the truth about Ella’s father, who has been kept ‘out of the picture’. This is echoed in the story of Iris, whose poignant painting of the two small girls is based on the true story of the artist Sir Herbert Gunn, who was estranged from his daughters, following a bitter divorce.

So The Very Picture of You is about a portrait painter, her sitters and their stories. It’s about the huge secrets that can lie within families, untold. Most importantly it’s about how we look at each other, and what we choose to see.