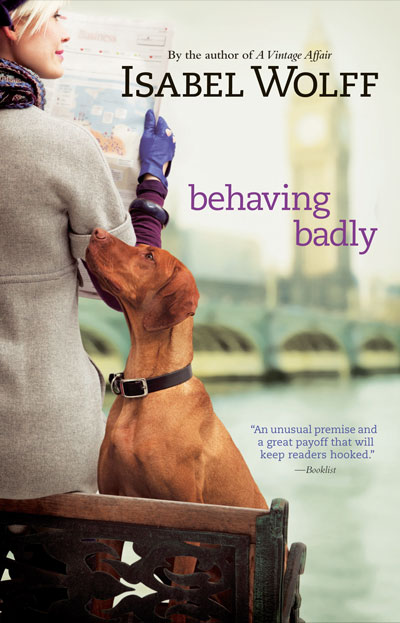 All men are beasts…

…or so Miranda Sweet believes. As an animal behaviourist, she can get inside the heads of deluded Dalmatians and introverted iguanas, but she can’t work out why the men in her life behave so badly. Animals are braver kinder and a lot more reliable. So Miranda’s given up on love to open her own clinic and work her magic on neurotic pets and their grateful owners.

But can she keep the whole male species at bay for ever? Her best friend, Daisy, an incurably romantic wedding-planner, doesn’t think so. When a delicious photographer comes into her life, even Miranda starts to wonder if she’s been a bit hasty. But, just when she’s letting her guard down, her past starts to catch up with her. Now, she has to face up to her own behaviour, which hasn’t always been as sweet as she’d like to pretend…

Buy The Book
"A compelling, heartwarming read."- Heat Magazine
"Sharp and funny... Wolff skilfully blends the serious with the hilarious in a subtle combination of pathos and humour."- Birmingham Sunday Mercury
"This book is so good because it's funny, tender and true."- Closer Magazine
"Wolff has a light touch and a slick prose style that makes this story flow effortlessly."- Marie Claire
"Wolff combines lighthearted prose with thought-provoking issues like personal morality and deception... a surprisingly enjoyable and refreshing read."- Western Daily Press
"A charming comedy that'll reel you in from the first page"- Company Magazine
"What's between the covers here is a genuinely superior confection..."- The Independent on Sunday
Tweet Follow

‘Rescuing Rose’ was, to my great relief, a huge success in 2002. One of the things that readers said was how much they had enjoyed the fact that the heroine, Rose, was an agony aunt, desperately trying (and often failing) to solve her readers’ problems – and, ironically, with a huge, unresolved problem of her own. So when it came to planning book five, I decided that the heroine would be another agony aunt, but of a different kind – an agony aunt for animals and pets. I’d read articles about animal behaviourists and had become fairly fascinated by the subject, and so I began to do some research. Once I’d done that I decided that Miranda Sweet would be an animal behaviourist whose own past behaviour leads much to be desired.

So ‘behaviour’ is one of the main themes of the book. The others are courage – different kinds of it – both emotional and physical – and also redemption and forgiveness as well. Miranda has done something terrible years before for which she will seek forgiveness during the course of the book. This, crucially, is where Shakespeare’s ‘The Tempest’ comes in. Those of you who’ve read ‘Out of the Blue’ will know that ‘Othello’ is the template, in many ways, for that book (see the section on ‘Out of the Blue’ if you’d like to know more), and ‘The Tempest’ is the point of reference for ‘Behaving Badly.’ That is why I named the heroine ‘Miranda’, because that name (which Shakespeare invented specifically for ‘The Tempest’) means ‘admirable’, from the Latin, ‘mirare’ – meaning deserving of admiration. But in many ways Miranda has not been admirable at all. During the course of the book she must try and find the courage to do the honourable, admirable thing.

I decided that Miranda would be presented with a very difficult – I hope gripping – moral dilemma. She has hurt someone in her past – a young man called David. She decides to look for him, and seek reparation for what she did. But to her horror she finds she’s falling in love… How can she tell him the truth about herself – and who she really is – now?

Against this theme of the struggle to find the emotional courage to do the right thing, I decided to counterpoint Miranda’s best friend Daisy’s huge physical courage. She happily parachute-jumps and hang-glides and abseils, and yet hasn’t the courage to confront her long term boyfriend, Nigel, about his failure to commit.

I loved writing the animal scenes – the pet problems and animal ‘agony’ letters – the puppy parties and the dog show too. Llamas also feature in a big way. Nearly all my novels feature animals, and I love putting them in because animals are such a touchstone for human feeling. But the important thing about being an animal behaviourist is that you have to understand the human behaviour, before you can begin to sort out the pet.

My books involve a search for redemption – they are ultimately uplifting and hopeful. And I hope that you’ll feel that the journey to Miranda’s redemption – despite her difficult moral and emotional struggle - was well worth your time.