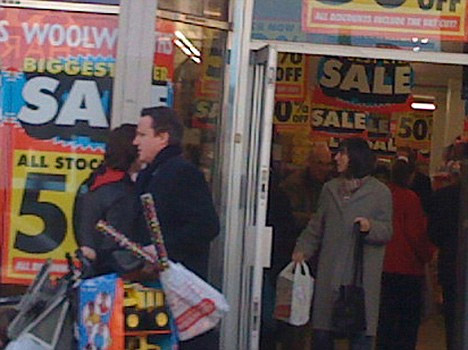 Where do you think David Cameron bought his Christmas wrapping paper this year?

Last weekend, the Tory leader was pictured emerging from the Notting Hill branch of Woolworths, clutching a huge bag filled with wrapping paper and toys that he'd picked up in the store's closing down sale. I didn't know whether to cheer or despair.

On the one hand, I am delighted that Cameron is a fan of Woolies. On the other, it's so desperately sad that - barring some last-minute miracle - the chain is to disappear from our High Streets.

By a curious quirk of fate, last month I was in the same branch that Cameron visited when I overheard the manager say that trading in the firm's shares had been suspended. It is only a slight exaggeration to say that I felt like crying at the loss of a lifelong friend.

Looking back, the signs had been there for months - the endless '3 for 2' banners everywhere that had begun to feel not so much a tempting offer as a sign of desperation; the low prices that seemed to have become fatally low.

Most alarming was the closure, six months ago, of a huge branch I occasionally visited in North London. And now the axe has fallen on them all.

In probing what's gone wrong, most armchair analysts have blamed the diversity of Woolworths' merchandise for its demise. TV reporters were filmed emerging from a branch looking perplexed, holding up a CD, toy car, girls' cardigan, tin of paint and bag of pick 'n' mix sweets - like the sad relics of some long-ago era.

This puzzling variety, they seemed to be saying, was somehow a failure of the shop. On the contrary, as any Woolworths-worshipper like myself will tell you, this is what gave Woolies its unique appeal.

Woolworths is and has always been the ultimate pick 'n' mix store - and not just at the confectionery counter. It was a true Aladdin's cave in which you could find anything and everything - usually on one floor and always at low prices.

Where else could you pick up a garlic press, DVD player, lightbulbs, ream of A4, popcorn maker and Cinderella dressing up outfit, all within 20ft of each other and for less than £50?

But the real Wonder of Woolies - for me, at any rate - was that it remained a paradise for children. Everything that children love was there - toys, sweets, DVDs, computer games, art materials, trendy clothes and books.

In a decade where so many toy shops have been driven under by the retail behemoths Toys R Us, Tesco and Amazon, Woolies was the only place where children could run up and down the aisles, like mine do every Saturday, comparing Barbie dolls with Bratz, Hot Wheels with Road Rippers, and V-Tech laptops with Fisher Price, without fear of reprimand from a jobsworth store manager.

My five-year-old, Alice, adored going to Woolies to spend her pocket money, just as I did four decades ago.

As we walked down my local High Street, even my two-year-old would start straining at his buggy straps. By the time he'd spotted the iconic red 'W', he'd practically burst out of his restraints, like some miniature Incredible Hulk.

It wasn't hard to work out why they liked it so. In Woolworths, my daughter knew that, even at the age of five, she had spending power. She could buy a budget fashion doll or pony for a pound each.

Good behaviour over the week might be rewarded with something I would buy for her, perhaps from the excellent range of Ladybird children's clothes. And, of course, she was always allowed a little something from those bins of multi-coloured pick 'n' mix.

Seeing their enjoyment would bring back my own memories of trips there every Saturday in the Sixties and Seventies. I remember buying my first knitting set and first eye shadow in the days when it sold make-up.

One Christmas I bought my mother an arrangement of plastic flowers, in a white vase, for 50 pence. It was every bit as hideous as it sounds, but she kept it until she moved house last year.

I remember, too, how sought-after Saturday jobs at Woolworths were - not that I was ever lucky enough to get one - and the shocked thrill of seeing naughtier children shoplift from the pick 'n' mix.

Then for a few misguided years I didn't go there, only rediscovering Woolworths in my late 20s as a place to buy presents for nephews and nieces - as well as stationery and household supplies for myself.

Oh, I know Woolworths was sneered at by the Tsars and Tsarinas of style. But only, I suspect, because they never actually deigned to venture inside.

Had they done so, they would have discovered that Woolies has always sold good quality kitchenware including, currently, a retro enamelware bread bin (£7.99) that would not disgrace the most expensive Notting Hill kitchen, some pretty blue mugs (£2) and an elegant porcelain tea set (£4.99).

There were also witty gifts for girls about town, including floral Tools for Girls (£12.50), a Hot Flush Fan (£3) and an Inflatable Husband (£5).

There was also the extensive range of gardening supplies (a winter jasmine that I bought from Woolworths ten years ago still flourishes in my garden), which meant that you didn't have to fight your way through the aisles of some DIY megastore.

Whatever you wanted, Woolworths had it. I am going to miss it like mad. I'll miss the convenience and excellent value of it, and the fact that for all its cheap and cheerful image, Woolworths, like all National Treasures, is simply for everyone.

I'll miss the reassuringly unchanged nature of the shop - its appearance so little altered from my childhood.

I'll miss its friendly young staff, who always looked as though they actually enjoyed working there (how often can you say that about check-out staff?).

Above all, I'll miss going to Woolworths as part of a constant thread that wound through generations.
When I told Alice that the store would almost certainly be closing, she looked stricken for a moment, then asked me if I'd buy her the Snow White doll and horse that she'd been saving up for for weeks. How could I refuse?

I'm only sorry that she won't get the chance to enjoy those same precious moments with her own children one day.

Goodbye, Woolies. You really were wonderful.