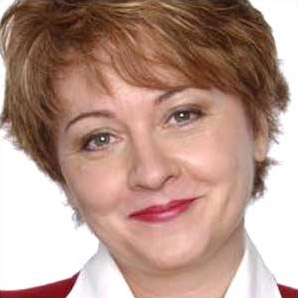 THAT IS absolutely brilliant,' breathes Anne Diamond excitedly as she inspects Keith from Essex's new hairpiece. 'I mean it's really fantastic,' she repeats, flashing him an encouraging smile. Keith from Essex is as bald as a coot but is undergoing a trichological transformation during a 'Toupee Makeover' on BBC1's daytime show, Good Morning . . . With Anne and Nick. He smiles sheepishly as the camera pans in for a closer look. 'The front is breathtaking,' Anne confides to her million viewers in an awestruck tone. 'Keith,' she says with a giggle, 'do you mind if I have a little feel?' Anne Diamond is having an extremely busy morning. In addition to assessing toupees she has introduced a harrowing report from Great Ormond Street Hospital, helped chair a phone-in on how to make a will and introduced Good Morning's real-life telly-romance, 'A Touch of Love'.

She has also just received, on air, a People Of The Year award for her campaigning on cot death. For a moment her composure seems to crack as she remembers the death of her own four-month- old baby, Sebastian, in the summer of 1991. The jaw stiffens and the facial muscles contract. Tears threaten to well up in her hazel eyes. But she quickly regains her composure, the bright smile returns in an orthodontic flash and she is soon chatting away once more with co-host Nick Owen. For the best part of two hours, and with very little help from the autocue, she has bantered and giggled, and wittered and chattered and sympathised and rolled her eyes heavenwards at some of Owen's bad jokes. It is a performance of relentless sparky cheerfulness, fascinating to watch.

Afterwards, in her cluttered office, she explains how she has learnt to control her emotions when discussing cot death on television. 'I've developed a technique,' she says. 'Because I've had to. It's not easy, but I've simply had to learn a way to do it.' Anne Diamond is a Pro. That is why, at 39, she is the Queen of Sofadom, the doyenne of daytime TV. Anybody in broadcasting will tell you that and will say it with genuine admiration. She is unflappable, fluent and fast. She gets on well with colleagues; if she has rows with them, they are never personal. She also looks pleasant on screen without being so attractive that she excites envy in women or distraction in men. She is bright, without being intimidatingly intelligent. Married with three sons - the latest was born in May - she is simply the chirpy young mum you might bump into in Safeway.

ANNE Diamond was born in respectable middle-class obscurity in Somerset where her father James, a Scotsman, was a teacher. She had no plans to enter journalism. 'My only ambition then,' she admits, 'was to become a concert pianist, something at which I signally failed.' While working at a Minehead holiday camp one summer, a waiter suggested a career in journalism. She started work as a reporter and music correspondent on the Bridgewater Mercury in Somerset, then moved to the Bournemouth Evening Echo. 'I always had my eye on the next step ahead,' she admits. 'Ambition in men is rather admired isn't it? But if you apply it to a woman it implies that you are hard and cunning and ruthless and I really don't think I am. But I have always targeted something I have liked to reach for and gone out and done it.'

In 1979, she joined the now-defunct ATV as a reporter, continuing as a news presenter on its successor, Central Television. But she abandoned provincial popularity for the chance of bigger and better things in London. 'Why be a princess,' she is reputed to have said then, 'when you can become a queen?' Hired by the brand new TV-am in 1982 she got her first big break when the Famous Five celebrity presenters stomped out of Camden Lock. Within weeks the unknown reporter with the cheeky chipmunk face had taken over from Angela Rippon and Michael Parkinson. Anne Diamond was breakfast television.

Did she cultivate her image? 'All the programmes I have ever presented have been live,' she points out. 'And on live TV you can't ever be anyone but yourself. It isn't possible to cultivate a particular image because there simply isn't time to act. So if I did have a girl-next-door image when I was on TV-am it's probably because then, 10 years ago, I was the girl next door.'

But she is not without hard edges. In 1987 she provoked Denis Healey into calling her a 'shit' and TV-am a 'shit company' by mentioning his wife's private hip operation during an interview about the Thatcher-Gorbachev summit. 'I got it full in the face fair and square,' she says with a philosophical shrug. 'But I would have been negligent not to have asked him that question.' Anne Diamond is unafraid of confrontation. In 1989 she took six months off to have her second child, Jamie. When she returned to work she found her appearances on TV- am had been halved, so she went to court and fought for more air- time. She obtained a pounds 250,000 pay- off and her final departure from TV-am.

It was during her period at TV- am that, much to the discomfiture of its board, she became Britain's most famous unmarried mother. In 1986, she became pregnant by Mike Hollingsworth, who was already married with a young daughter. It would take three years and a second baby before she and Hollingsworth became husband and wife. 'I'm not particularly in favour of women who are unmarried getting pregnant,' she says now. 'But at the time I wasn't a typical single mother. I was an extremely privileged one. I was earning a great deal of money and I had my own flat and a car. And I was with the father of the child, so I was hardly an average case.'

What does she think of the Government's present offensive against single mothers? 'The Government makes these sweeping generalisations,' she says, adjusting her multi-coloured knitted jacket. 'To say that all single mothers are sleazing off the state is absurd. It is probably true of some, but is grossly untrue of the majority who are just trying to cope as best they can with the cards which fate has dealt them.'

Is she entirely happy, I ask, with the peculiar mix of items on the programme, the bizarre juxtaposition of the trashy with the tragic? 'I'm not always comfortable with it,' she says. 'The gear changes don't always work. But then if you open a newspaper you'll get the same kind of mix on the page that we have on the show. You'll get the serious and the trivial, the important stories and the jokes, the comment column and the cartoons all together. Any good sub-editor will tell you that that's what makes a page live.

So you've got to get that same feeling in a topical television programme.'

But some television critics loathe the format, particularly the often emotional phone-ins. 'I really don't object to daytime TV,' said one, 'because it can open up quite difficult subjects. What I dislike about Good Morning is the smash-and-grab approach to human emotions. They'll do a phone- in on, say, hysterectomies and cover it with this carapace of care. Myra from Croydon calls in and gets 30 seconds to talk about her ghastly experiences. Ann and Nick look sad and concerned and they say 'Well, thank you Myra from Croydon'.'

Anne Diamond is polite and matter of fact, serious and articulate, businesslike and stunningly cheerful. But when I mention the criticism something approaching rage distorts her features. 'TV critics go on as though daytime television was the scum of the earth but it's doing an awfully worthwhile job,' she spits. 'It annoys the hell out of me that some of them talk about it as though it's nothing. They don't realise how insulting they're being to the millions of people who tune in and love watching. We have a very loyal audience.'

She also defends the power of daytime television to educate. Her successful campaign to warn parents about how to prevent cot death - the number of cot deaths has since been halved - was largely conducted on daytime TV. She starts to talk about Sebastian and, for a second, there are tears in her eyes. 'I have learnt to be, in a strange way, joyful about that now,' she says. 'And if I was told that I could have him again, even if only for four months like I did, I would still be happy to go ahead.'

Then Mike Hollingsworth enters. The interview is over; she has to collect her two older children from school. 'Are you really as cheerful as you seem?' I ask. 'Yes I am,' she says. 'You've got to be, otherwise you'd end up slitting your wrists. Anyway, I do think that there's still an awful lot to be cheerful about.'