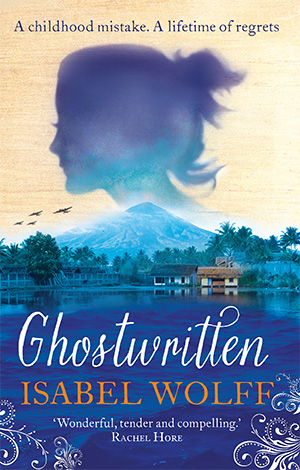 Isabel Wolff’s new novel, Ghostwritten, is set on Java during the Japanese invasion. She chooses her five favourite novels set in the Far East.

I read this wonderful novel when I was 12, and its quiet heroine, Jean Paget, and the man who is crucified for her, Joe Harman, have stayed with me all my life. Shute’s descriptions are so vivid that you can almost feel the stones beneath the women and children’s feet and the sun burning their skin as they’re marched across Malaya by their Japanese guards. Despite being a harrowing read, the book’s message is one of hope - that love can survive the most desperate odds.

EMPIRE OF THE SUN
J.G. Ballard

This brilliantly written coming of age story, set in the early 1940s, is about war seen through the eyes of a child. 11-year-old Jim lives with his ex-pat parents in China, but is separated from them after the Japanese invasion and is interned in the Lunghua prison camp near Shangai. Through the horror and the destruction, and the constant threat of starvation, Jim must live by his wits to survive. One of the great novels of the 20th Century.

Set on Hong Kong in the 1920s, The Painted Veil is a story of a woman’s moral and spiritual journey. Selfish socialite Kitty is married to worthy scientist, Walter, but is having an affair with a charming colonial secretary, Charles. When Walter finds out he extracts an unusual revenge. He lets Kitty choose either divorce - which would be her social death – or for her to accompany him to a cholera-infested part of China. Maugham allows Kitty to live, but caring for the sick changes her forever.

Set in 1800s Japan against the backdrop of the Satsuma Rebellion, this is the beautifully written story of Taka, a Samurai’s daughter, who falls in love with a servant, Nobu. But Nobu is not just low-born, he’s from an enemy clan. With Japan heading for a bitter civil war Taka is forced to choose between her family and the man she loves. The depictions of life in Japan during this time are fascinating and the storyline is riveting.

A wonderful historical novel about the beginnings of Hong Kong. Set in Canton in the early 1880s, its American protagonists, Walter Eastman and Gideon Chase, set up a newspaper as a caustic and parodic mouthpiece for their anti-opium trade views. As the paper prospers, Anglo-Chinese relations fail and the first Opium War begins. With a sprawling cast of traders, tricksters, artists and warriors this is an exciting and rewarding read.