A warm and witty novel with a clever twist on Shakespeare 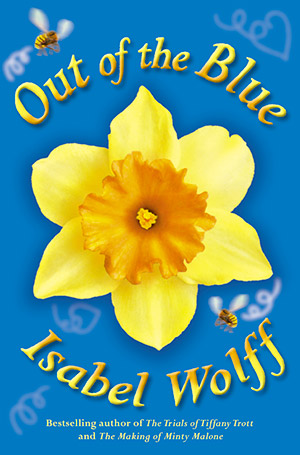 And since she published her latest novel, Out of the Blue a warm, witty romantic comedy she's been cropping up everywhere, from the Today programme talking about Italian women's lust for British men to beaming out of the pages of Metro.

Many years ago Wolff left Cambridge with an English degree intending to be an actress. But rather than risk failure as she puts it she went into journalism with the World Service.

She never intended to write a novel either, but back in 1997 the Daily Telegraph commissioned her to write a spoof column about the dating game.

A year later said paper dumped her for Helen Fielding, something that is clearly, and unsurprisingly, a sore point, and which we aren't to mention. The experience, however, gave Wolff the encouragement to turn her creation, her "little darling", Tiffany Trott, into the subject of her first novel. Out of the Blue is her third.

"I'm writing about all the different life situations," Wolff begins. "Tiffany Trott is single and looking for a bloke. Minty Malone is jilted and trying to get over it. With Out of the Blue, well, I decided that the next one would be married."

But surely that's dull? "Well, what are the problems if you're married?" she asks. I shrug. "Probably boredom, but also the threat of infidelity. I called the main protagonist Faith because it's all about who you put your faith in.

"She puts all her faith in her best friend Lilly, more than she does in her husband. Faith is a bit of a dupe. She's in awe of Lilly who is glamorous and powerful and witty. It's about who owns the wife. Is it the best friend or the husband?"

Out of the Blue is for those of us who savour the office gossip. There are secrets and lies, flings and affairs, love and deception. And over the years Wolff has wormed her way into every nook and cranny of glamour journalism and daytime telly, so she knows both its sparkle and its banality.

There's the magazine editor who has a near-fatal slip on a cover of Vogue ("They're lethal" Wolff says, herself once a victim, "like sliding on ice"), the lover with a dark secret and the dog ("the second most intelligent character in the book") with a castration complex.

But oddly, there are enough subtexts to keep even literary buffs quite contented. The Othello references, I admit, passed me right by. "What I'm trying to do is invert Shakespeare's Othello," Wolff announces triumphantly.

"Othello is the great black military commander who is easily duped by his Machiavellian friend, Iago, who is white. Iago destroys Othello by feeding to him all these poisonous lies about Desdemona.

"Othello believes him and is undone by it. He kills her, then kills himself. In Out of the Blue I've made the brilliant Machiavellist black, and the dupe white," Wolff steams on, "because when I was planning to write the book I was talking to a friend who has a Nigerian mother.

"I said I wanted to create a character who was vengeful but witty and was incredibly successful and glamorous. My friend looked at me and said, 'Please! Make her black'. You see, there are no complex or powerful or interesting black characters in mainstream contemporary fiction.

"Also, there are no black women editing mainstream women's glossy magazines. Not one. For someone like Lilly to be editing Moi!, which is the equivalent of Vogue or Tatler, is incredible.

"Okay, there are lots of black women who are posh they come from rich Nigerian or Ghanaian families but Lilly is poor, she's from the Caribbean. Lilly is both poor and black.

"She's like the scholarship girl. She's Becky Sharpe in Vanity Fair but she's black and she's aiming to be at the pinnacle of the rich white woman's world."